How To Cure Meat At Home 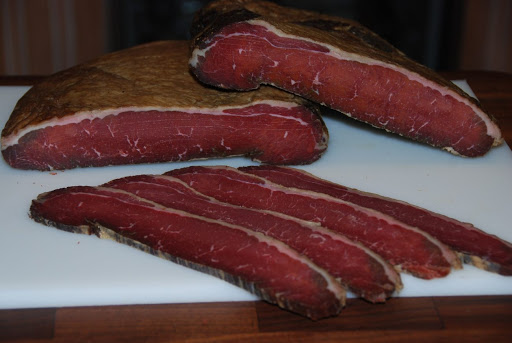 Curing meat has been there since time immemorial and it is a way of preserving meat for a longer period of time, considering back then there were no freezers. In this article I am going to give you brief explanations on how to cure meat at home. Carefully follow all the steps in this article if you want to achieve satisfactory results.

NB: when curing meat, salt acts as a preservative hence it should be treated as the main ingredient for curing meat at home.

This is the first method that you can use when you are curing meat at home. However, this method requires you to use a lot of salt since it entails burying the meat in salt. In order to use this method you need to have a few ingredients and equipment.

When dry curing meat at home you need to start by taking the salt and placing it inside a container. Add the 500g of meat and cover it again with a layer of salt. Your meat should remain buried in the salt for a couple of hours or for a day. The salt help to act as a preservative and also it helps to draw out moisture from the meat. So when you take out the meat from the salt you will definitely notice that the salt will be a bit wet.

After most of the moisture from your meat has been drained, take the meat out of the container and remove any excess salt from the meat. Take the coriander and black peppercorns. Grind them using a grinder until they form your spice rub which you will use to marinate the beef with. When marinating the meat make sure you really spread out the spice mixture so that the meat is evenly coated. It is worth noting that you can experiment with other herbs and spices of your choice, do not limit yourself to just using coriander and black peppercorns.

Once you have put the spice mix the next thing is to take a cheesecloth and use it to wrap the meat. Take kitchen twine and tie it gently on the meat in a circular motion. Make sure that the string is not too tight. If you do not have a cheesecloth then you can just neatly wrap the meat using the kitchen twine. The idea behind doing this is so that air can circulate around it, furthermore, it makes it easier for you to cut the meat once it is ready.

When you have wrapped the meat, the next step is to weigh the meat on a scale before placing it in the fridge. This is because cured meat should lose 35% to 40% of its weight before it can be consumed. So after you weigh the meat, you should write down the weight of the meat on a paper and tie it to the meat or you can write it down in your diary. Then next thing is to calculate 35% or 40% of the weight of your meat then subtract it from the original value. The answer that you get is the weight that your piece of meat should have after it is ready.

After all the weighing and calculating, take the cured meat and hang it in your refrigerator for about 4 to 5 weeks. Make sure the temperature of the fridge is not below 4 degrees Celsius as this may cause the meat to freeze, which is something that you would not want. You can regularly check on the meat to see if it is done. Once the meat is done, it will be ready to eat. It doesn’t need to be cooked.

This is also another method that you can use to cure meat at home and it doesn’t require you to use a lot of salt as compared to the above method. The ingredients that you will need for this method are similar to the ones found in the previous method.

NB: when using this method to cure your meat make sure that you have a vacuum sealer on standby. This is because you will need it to seal the meat after apply salt to it.

Once you have added the salt, take the meat and vacuum seal it so that you can cover everything up. Place the meat in the refrigerator and let it sit in there for about 5 days. After 5 days follow steps 2 to 5 from the dry curing method.

NB: if you smell a foul odour on your meat, this means that you did not properly apply salt to your meat and because of that, bacteria would have started growing on it. So you need to throw it away as this can lead to serious illness.

Cured meat can last for several months that is if it is prepared the right way. So if you are looking for an economic way to preserve meat, then curing it is the best method. It is worth highlighting that there are different methods of curing meat that you will come across but, most of them have salt as a major ingredient. This is because salt helps to extend the shelf life of the meat while also drawing excess moisture from the meat which could cause it to turn bad easily. Cured meat can be taken as a snack or it can be served with sadza and vegetables. If you notice any moulds or unpleasant smell on your cured meat it is advisable to throw it away as it might make you sick.